Apologies for being late again with the June"Read of the Month".

June was not only another busy month but an injury to my knee rather hampered me besides the difficulty I had walking.
I may have been injured but I still had to take the dog out for a walk.  Actually walking was good for the injury as I was informed by a doctor, but it did tire me so. 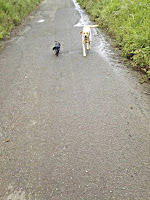 Also I was dog sitting for a friend.  I learnt a lot from this dog as it was very very different from Pearl and her ancestors.
It was a miniature dachshund.
It did not like going out in the rain and this week we had a lot of that.
Also it did not like long grass so it meant I had to adjust the walks I did with Pearl.
I found it a interesting week.

This is all rather appropriate to the "Read of the Month".

"The Genius of Dogs" by Brian Hare.

Like some previous books the ideas expressed in it and the theories suggested are all based upon a raft of scientific studies carried out all over the world.
Who knew there were people studying the humble dog.
Perhaps this explains why the author is American!!!!

I know of lots of people who would be only to happy to have a job studying dogs.
Despite this the studies quoted are fascinating and produce some surprising results.
Many of them are simple enough to be replicated with any pet dog.

If you have a dog or are interested in dogs this book will help you understand them better.