Well Summer is on the way;

Pearl is in season.


As a rule of thumb a bitch's season lasts 3 weeks.


The best way to avoid this inconvenience is to have the bitches spayed. 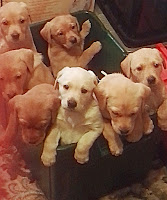 I have not done this with my dogs until they were quite old because I have had a couple of litters with each of my dogs.
I first did it because I wanted to keep Ruby's line going. Well a bit of her is in lots of puppies now.
Later I did it because although it is a full on intense enterprise I enjoy seeing the whole experience.

So I will have to wait a while before I can go out in the van.

Posted by Anna Chelmicka at 14:34 No comments:

March is a special month for several reasons.

1. March 1st is considered the first day of spring.

2. Spring equinox is towards the end of the month.  This year it is Wednesday 20th March.

3. Summertime begins (the clocks go forward and we all lose an hours sleep) at the end of the month.

As the daffodil is the flower of spring so my photo includes daffodils. 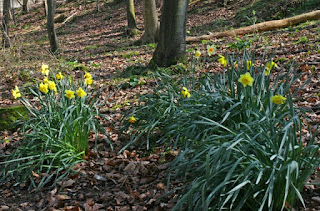 I hope you enjoy it.
What is your favourite photo of spring?
Posted by Anna Chelmicka at 15:41 No comments:

Well a significant occasion; I have just completed my first book signing.

It was an informal occasion, chiefly providing the opportunity for friends and family to come and inspect the book.  As a consequence I took all three books; 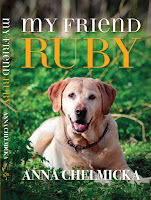 2.  "My Friend Ruby" (about the first dog I  had as an adult.  She was especially important because she started the whole process of searching out campsites where I could walk dogs).

(This book is about my father, only because he was a very close friend of the author's father.  It was my meeting and association with Rita which planted the seed that I too could write.  Rita was enormously encouraging). 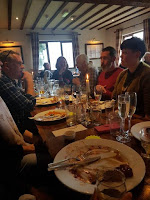 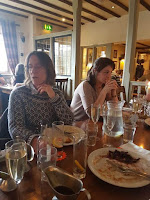 The event started by celebrating the publication of my second book with several Pucklechurch friends.

It was a most enjoyable occasion. 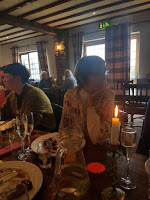 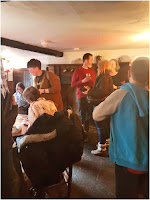 After this was the book signing in another part of the pub.

I was surprised at how many people came and of the number of books I sold.

I really enjoyed the occasion.

I hope a book signing is forthcoming at WH Smith in Bath.  I am waiting to finalize details.  I hope it is as successful and enjoyable as my first.
I am also thrilled to learn "Caravan" magazine wants to use my book as a prize.
All very exciting 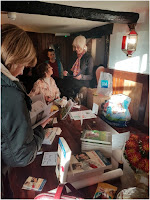 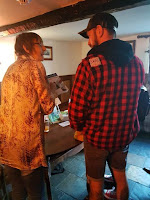 Posted by Anna Chelmicka at 16:08 No comments:

I thought choosing a book each month would be difficult as I have so many I am happy to suggest.  So far it has been straightforward.  Obligingly my Reads of the Month seem to tie in with current events or happenings.

This is also so for my March selection which offers a different perspective of;


Sounds heavy going but it is not.

Auto-biographies are not my favourite genre and this is unequivocally an auto-biography.

Carmen Bin Ladin, a Swiss national, is the sister-in-law of the notorious Osama Bin Laden.  The book recounts her meeting and marriage to his younger brother Yeslam; her life in Saudi Arabia and her reasons for moving to the US with her two daughters.

The book is not especially well written but I found the content so mesmerizing this did not matter unduly.

It gives an insight into a world which I have very little experience of but which occupies many column inches in the Western press.

It made me really thankful that as a woman I live in the "West".

I felt distinctly uncomfortable at the hypocrisy of the men who were quite happy to indulge in the freedoms the "West" allowed them but then were so autocratic in their countries.

It also made me reassess the countries of the Middle East and our relationship with them, especially Saudi Arabia.  It has also made me think seriously about holidaying in these places.  Dubai may have skyscrapers and be modern but has it really changed?  Food for thought.

What do you think?

I would end with"Enjoy".  I'm not sure this is a book one enjoys.

Posted by Anna Chelmicka at 01:23 No comments: