As you all know the research I did for my book "Wonderful Walks from Dog-friendly Campsites" has had a profound effect upon my thinking. So much so that my daughter has remarked I have become somewhat militant.   I have definitely become more passionate about the countryside, wildlife and the whole issue of climate change.

As a consequence when I received an invitation from CPRE to join them at a protest gathering in London I was intrigued and decided to investigate. 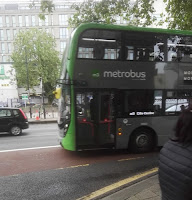 My day began exceptionally well.  I opted to get to the bus station via the recent "metro bus".
As it was the first time I had used this bus the system was totally new to me.  I asked the bus driver to explain.  He spoke quite quickly, then hopped out of the bus and actually got me a ticket from the machine beside the bus stop. I told him I did not have the exact money and would need change.  He said not to worry.
So I gave him all my change; about 3/4 of the fare.
How wonderful to meet such a kind and thoughtful person. 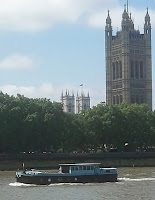 The journey to London was uneventful.  We were dropped off beside the River Thames close to Albert Bridge (I think) by the Houses of Parliament.
I did not take careful note of names and places etc, I just followed the people from the bus.  They very quickly got swallowed up in the crowd all along the road. 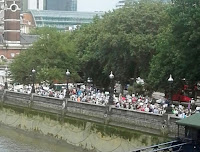 It was NOT a march.  Instead there were groups of people of varying sizes waiting patiently on the pavement along both banks of the river as well as across the bridge,
It was suggested that as many as 16,000 people were on the streets.  Certainly there were lots of organizations such as WWT, Wildlife Trusts, RSPB,  CAFOD, Friends of the Earth, Greenpeace.
I also saw a Buddhist  group  and a WI group. 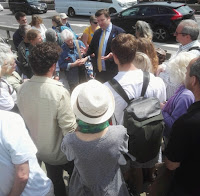 I soon realized beside each cluster of people was a name of an area in the UK. Eventually it came to me it was the name of the various constituencies.  The groups were waiting for their MP to come and talk to them.  I listened to some of the MPs.

It was most impressive.  They spoke without microphones or anything; no notes; and they answered the questions the crowd put to them without fobbing anyone off.

I listened to a Labour and a Conservative MP.
They were both brilliant. (No other word for it).

What of my MP; well he did not turn up.  I don't know why.  I was not surprised.

The four hours or so I spent in London was a real tonic. I saw another aspect of life and society and it was not nearly as black and depressing as portrayed in the media; TV, print and digital.

With so many organizations and people right across the age range concerned about climate change I feel more confident that something positive will happen.

Then it was time to board the bus for the journey home.  This too was eventful.
One young man was missing when we set off at the appointed time.  As we drew out into the traffic and onto the bridge the people in the back of the coach saw him running along the pavement.
Unfortunately the coach could not stop to wait for him.
He kept running round the corner onto the bridge chasing the coach.
With the heavy traffic the coach moved across the bridge very slowly.
The closer he got to the coach the slower he ran, unsurprisingly; it was a long bridge.  Nevertheless he did get to the corner at the same time as the coach.
When the coach turned left off the bridge the driver could pull over for the man to board.

Now we had the full contingent it was homeward bound after a day full of pleasant surprises.

A final message;-
Please join an organization concerned with the planet earth.
I would be delighted if you would make it the CPRE.
Help protect our countryside, flora and fauna.