My intention to write a weekly blog has hit the dust this past week or two.
The reason is very simple:- I had several commitments which took up a considerable amount of my time and left me very tired. I nearly didn't post this week as I had planned to do another couple of campsites but the weather does not look so good so I decided to hang fire.

What took up my time:-


Sadly for various reasons I did not take any photos so no pictures of the event. This is something I would change next year plus a couple of other things IF they ask me to do it again.

Now I am planning my trip to Scotland. The campsite is in the far north of Scotland near Inverness.  I estimate it will take at least 2 long days of driving to get there.  I'm not sure which way round to do it
or a variation on this.

Also a consideration is the weather.
Rain is forecast for most northern areas for all of the next 2 weeks. Not good. 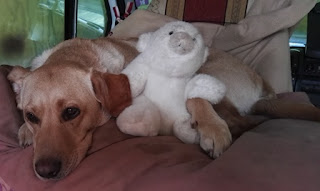 Here is a photo of
Pearl in the van with her toy.
She likes to have this toy with her when she goes off in the van.
Hopefully we will be off soon, toy and all
Posted by Anna Chelmicka at 14:02 No comments:

To Go or To Stay

Had a wonderful time at Graffham Camping and Caravanning Club Site last week.  Weather was glorious; met some delightful, generous people; walks were fabulous though the climb to the South Down Way was mega steep.  I was rather disappointed with my trek along South Down Way. It was uninspiring. I expected to see magnificent view of the countryside after such a seep climb. The section of The Way I walked was along a plateau between fields border by woods. My view was obscured by the trees.

However, the supposed "short" walk (it was longer than I anticipated )was wonderful. So much so I did it twice!!! It meandered through several woods.

Who would have though trees could be so different?

The icing on the cake was a rest break at the pub in Selham "The Three Moles". It is a sad fact of life that many pubs nowadays are closing especially in the countryside as they are no longer viable businesses. "The Three Moles" was until recently one of these. It had just re-opened under new management. Now they open from noon til 11pm. They serve light bites during the day with a fuller menu from 5pm. Unfortunately there was nothing on the menu for me (gluten free) except chips. I did mention this. It was a charming place and they let me take Pearl in and spoiled her with a treat.
Now I am at a different campsite and the weather has changed. Saturday when I arrived was beautiful and the campsite was busy busy busy. I explored. My initial findings were not promising. I even investigated the possibility of finding a different campsite in Buckinghamshire, without success. The game changer was finding a private route down a field to a footpath which gave easy access to several other routes. I checked the weather app. It was due to change dramatically from about 1pm. I decided to get up early on the Sunday and do the short walk up to Ivinghoe Beacon. I was off and away by 8am. What a change for me. Usually I walk in late afternoon. What a surprise this was. Being a Sunday, even early there were quite a few people around, especially runners it seemed. I am so glad I did this.  As predicted the clouds came over and though there wasn't any rain it became very overcast and dull.
The rain finally came during the night together with the wind. Since then it has hardly let up. It is like being in a racking chair, the wind is buffeting the van so.  I did manage a morning walk with Pearl without getting too wet. The rain eased late afternoon so I set off. I explored the beginnings of the long walk to the canal path. This looked promising. Coming back it started to rain in earnest and we both got VERY wet. I am so pleased I decided NOT to take my camera.
Since then the rain and wind has only increased. Today Tuesday it is awful
My dilemma?
To go or to stay.
I have to be back by Wednesday as I have to be at the Community Centre early (6am) as a poll clerk for the general election.
The weather is suppose to be better on Wednesday. Windy but with sunny spells.
Will the weather be good enough?
Who knows?
Will I be able to do the long walk in time?
I have no idea how long it will take me.
Should I call it a day and go home now?
I could come back another day but that would be a great inconvenience and would be quite expensive. Also I have paid for tonight's pitch.
What to do?

Posted by Anna Chelmicka at 05:21 No comments: