Travelling and reading are suppose to broaden a persons understanding and experience.

As the date of my departure drew closer I decided I needed to increase my knowledge of Africa.

My first port of call were the travel books such as;

These were very interesting as they gave a lot of information about the physical geography of  places (where and what to see etc) A good place to start but not very much about the "essence" of a place or country.

In my experience wandering around and talking to local people is essential to  gleaning the "essence" of places.  Having a dog with you greatly facilitates this.

I wanted to know more about not only the continent but also about the many different countries of Africa.  There are in fact some 44 countries. (New to me!) 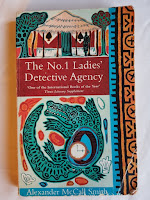 I was especailly interested in Botswana and Namibia as I would be travelling through them and knew almost nothing about them.
My only knowledge of  Botswana was from the novels by

(Not Read of the Month but a good read nonetheless)

Then I found a book somewhere (senior moment; don't remember where) that was
which I found hugely informative and influential.

The eagle eyed among you will notice this is its second appearance as "Read of the Month".

I flagged it up as the October 2019 Read having just read the first couple of chapters.

I have now finished it.
It is not an easy or uplifting read.
It really needs a health and safety warning;
contains descriptions of gross human violence and destroys any concept of goodness overpowering evil.

No one comes out well.
All succumb to greed and self interest including we in the West, the UN and the various charities. It is hypocritical to think that we know best and would do things differently.

The book also illustrates the fragility of democracy.
How easily it can be circumvented.
No one can afford to be complacent

And in today' s current climate in the UK it is a timely reminder that ordinary people do have the power to change things if they have the will and voting is an important way to exercise that power.

So please everyone who gets as far as this please


If you do not know who to vote for DO NOT stay at home.
Go and vote but spoil the ballot paper. (One way this can be done is to tick all the boxes)
Why should you do this?

Posted by Anna Chelmicka at 03:53 No comments: 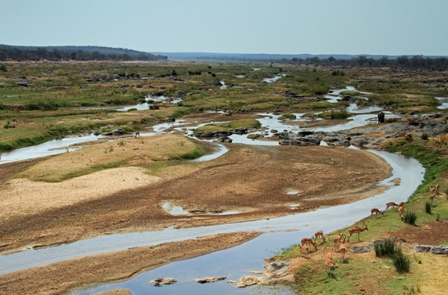 Quite justifiably Africa is renown for its wildlife.
This is the quintessential view of Africa;
wide open spaces populated with a diversity of wildlife.
( The view was awesome. The photo does not do it justice as the profusion of wildlife is not evident unless it is greatly enlarged) 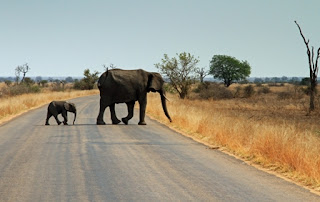 Throughout my trip through all four countries of Southern Africa, everywhere I encountered wildlife, unique to the continent from

I did not take as many photos as I wanted for 2 reasons:


So rather than take lots of photos I decided to just enjoy the experience of quietly watching all the different animals.
I was fortunate to see so much.

Looking through my photos I am surprised at how many I did take.

Some of them are not bad.

What do you think?


Which one do you like best?
Every time I look at them I change my mind.

Posted by Anna Chelmicka at 15:38 No comments:


The countries we travelled through were

The majority of the roads in South Africa were tarmac so driving was straightforward.

There was some traffic to contend with but not nearly as much as in the UK.

The biggest problem was everything else on the road; people waiting; people walking; cattle.

In the Kruger National Park, which is the size of Wales, it was the wildlife.

The major roads are tarmac with very wide gravelly "shoulders".

These were used as grazing by livestock; as a thoroughfare by carts pulled by donkeys as well as  people.

Set far back from the road and the gravel "shoulders" were the buildings surrounded by fences.
This was to keep out the wildlife.

The driveway to the campsites and villages was mostly sand sometimes gravel necessitating careful driving.

Road to Victoria Falls was tarmac.  It was a relaxing trip as we were taken by coach

Only the major routes were tarmac.
All other roads were gravel tracks commonly called "washboard" roads. These were so called
because the ridges running across the road looked very similar to the old fashion washboards.
Driving on these roads was an experience.
To have a smooth ride one needed to find the optimum speed;


Also finding the best place on the wide track could greatly improve the ride.
On these roads the greatest hazard was having a puncture.
The average number of punctures was 15 so many spare tyres were carried.
To aid those who found themselves with a dud tyre we travelled in pairs on these "washboard" roads.

The compensation for such a challenging drive was the spectacular scenery.

We must have all been excellent drivers because our group only had 5 punctures in total.
For this we all received a distinction in the "Driving Extraordinaire"

However I also received the "Wooden Spoon" as I had 2 of the 5 punctures.

Well now I have completed my African Trip.

I really had no idea what to expect.
The first week was a tusanmi of different sights, sounds and people.
It was all a bit overwhelming.


With reliable internet I can resume blogging.  It was impossible to post whilst away as access to the internet, when available, was very erratic.  In addition the schedule was so packed there was just no time.

What an venture. With this being my first time: 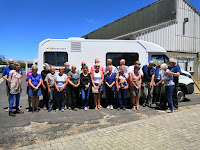 It was all a very novel experience.

First was the meeting at the airport of the other participants in this adventure.

Second was the collection of the motorhome;

This was a lot to grasp in just a couple of hours.

Then we were off on the start of ultimately our 5,000km trip with a short drive of 75km to a shop to stock up on food and then to the first campsite of about 29 of the tour. .