The 75th Anniversary of VE (Victory in Europe) Day is this Friday 8th May.

This has hugely influenced my Read of the Month.
If the events recounted in this book had been any different there would not have been a VE Day;
at least not celebrated by the Allies.


The book is like a modern day thriller except it is true and so the outcome is already known.
Surprisingly this does not make it any less of a thriller
I found it a page turner and finished it is just a few days.

With hindsight it is frightening to realize just how precarious the situation was in May 1940.
The book gives a comprehensive insight into the politics of the time.
In addition the people involved are more than the 2-dimensional reputations history has given them.


The days from May 24th to May 28th 1940 changed the course of 20th century history.
During these 5 days under discussion was

I also liked this book because it demonstrates Neville Chamberlain's political understanding and skill despite being seriously ill with cancer.  Chamberlain was persuaded to remain a member of the War Cabinet after his resignation in May 1940 until his death because Churchill realized his expertise was vital.

Neville Chamberlain's reputation was tarnished because of the peace treaty (Munich Agreement) he signed with Hitler in September 1938. 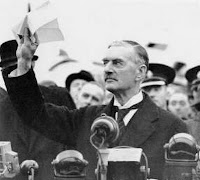 On the journey to Munich  a member of the British delegation was a young political assistant, who was later known as Sir Alex Douglass Hume and became Prime Minster in the 1960s.

In his memoire he recounts the real reason Chamberlain followed the policy of appeasement for so long and signed a Peace Treaty with Hitler.

Chamberlain was certain war with Hitler was inevitable.
However he also knew the British public was extremely reluctant to engage in another conflict.
He had to demonstrate to the people that there was no other option.
Hence his very public celebration of the Munich Agreement; "Peace in Our Time".
Chamberlain was certain Hitler had no intention of honouring the Agreement.
When the British public saw this they would be more inclined to back the government in declaring war.