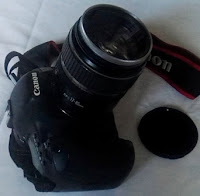 My normal camera kit is a camera body and just one small zoom lens (17-85mm).
I decided upon this as being the easiest to carry several miles yet most photographically proficient.

This would not be adequate for my Africa trip.
I needed to buy a longer zoom lens; at least 200mm long.
As the probability of my using the lens after the trip was unlikely I looked for a secondhand one.
So it was I bought a Canon 75-300mm lens.
Perfect so I thought,

I was unable to give it a full work out until I got to Africa.
Then found to my disappointment that the lens was faulty.
No matter what I did I could not get it to focus sharply at the high zoom 135mm+

All the good photos were taken with my usual kit.

When I returned home I went back to the shop and informed them the lens was faulty.
By coincidence the Sony representative was there displaying Sony products.
We had a long chat about the Sony RX10 whilst my lens was being examined.
(As a result of discussion with people on the African trip I thought this model would be a better option than my current one).
Instead of a refund I was told the lens was fixed.
What a disappointment!
I carried out further research and in the process discovered another camera shop.which had a refurbished Sony RX10M4.
I went to the shop taking my camera to ascertain what deal I could get in part exchange.
This was informative:


This gave me food for thought.

I decided to go back and ask for a refund.  This was given without any quibble or hesitation.
I also decided to get a new model as a cash back was offered on new ones.
If I waited until after Christmas I might just get a further discount.
So it transpired

There is only a very small instruction manual to help one get started so I have bought a manual from Amazon (the only place I could get it.  For ethical reason I try not to use Amazon).