So here I was at Warner's Southern Motorcaravan Show at Newbury.  This was my first, perhaps only, Motorhome Show.  Only time will tell. 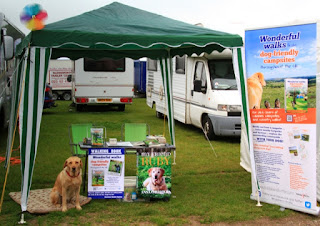 Friday arrived overcast, cold and rather windy.  After breakfast I explored the grounds with Pearl and then did the final preparations of the stall setting up a table, chairs, posters, banner and books,

Soon I was all set to go.

Watching the other stands scurrying around tweaking their displays was interesting.

Then it all began at 9.30am when the gates opened.  I was surprised to see so many people surging along the path so soon.  They barely hesitated as they passed seemingly looking for something specific. After this initial rush things settled down to a steady trickle.


There was quite a bit of interest in my book and I sold some; 6 in fact..  I found it a difficult day because it was cold; dry but VERY cold.  I kept adding layers throughout the day. The arrival of a friend to help was a most welcome distraction.  I was delighted when the show closed at the end of the day and I could stay in my warm motorhome.

Reflecting on the day I was rather disappointed. It had been a slow seemingly unproductive day. Saturday, we were told, was usually a little better with Sunday similar to Friday. It appeared the show was not going to produce the results I had hoped for.

Another problem suddenly materialized; a high pitch whining which I eventually track down to my solar panel inverter so I turned it off.  As it got dark the lights in my van dimmed and faded completely.  Next I noticed the pump for the tap would not work,  It emerged all the electrics in the van had failed. With no light there was nothing for it but to go to bed. 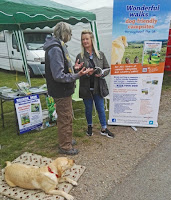 Saturday morning was easier because preparation was just a repetition of Friday morning.  This time I was all ready for a rush but there was none.   It was a better day however as not only was it warmer but the sky began to clear and the sun shine.  There was a steady stream of people all day many of whom paused as they passed to stop and chat.  There was a great deal of interest and I sold 15 books.  I felt much more optimistic.

My motorhome still had no electric so it was another early night. Tomorrow was the final day.  Now I had no idea how it would go,  The weather forecast was not very good.

Sunday was warmer and drier than expected.  Again there was no rush but a steady flow. It was another good day with many people interested in my book and several people purchasing a copy.  Several of the people I spoke to were looking at motorhomes with a view to purchasing one.  Even so I sold 14 books.

Then at 4.30 pm the show closed and everyone was rushing around packing up.  It did not take us long to take down the gazebo and pack everything in the motohome. It was extremely useful having the van just behind the stand.  Not just for the setting up and packing away but also for the convenience of having everything to hand.
Shortly I was ready to go home.

Reflecting on the experience I feel it was well worth it and I learnt a great deal should I ever decide to do another one.