This has very recently happened to me.
I am not sure how to proceed.
Suggestions are most welcome. 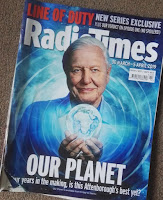 It all started with reading the Radio Times.
A review of the programme on Netflix narrated by David Attenborough remarked how distressing the programme was because it kept mentioning how the habitat of various animals which were filmed was disappearing at an alarming rate.

Then I saw a trailer on the TV about a forthcoming programme which shows satellite images of the earth over several years. It was frightening how big many towns and cities had grown across the world and how much light pollution there now was. 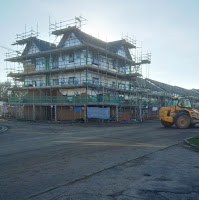 Just before Easter I went away in the motorhome for a few days.


Wherever ones goes new buildings are being erected; usually houses.


Over Easter I visited a friend. On driving back to her house I had a brief glimpse of a partially completed road.  She told me it was part of extensive housing development which was going to demolish the nearby greenhouses.  Not long ago these greenhouses produced 85% of cucumbers consumed by the UK.  Now many of the greenhouses are empty and derelict (not a pretty sight) and cucumbers are now imported from Holland.  When I was told this Brexit immediately came to mind.

When I return home and finally caught up with the news the top story was the demonstrations in London to highlight various environmental issues.  I was pleased to think that so many people were concerned enough about the environment to protest in such a visible way.  However, though it is admirable to protest and bring issues to the attention of those in authority  it is important that a viable alternative solution is offered.

My reservations about the demonstration is the solutions suggested.

It is hypocritical to suggest places around the world like the rain-forests in Asia, the coastal area of Polynesia, the jungles of South America and the plains of Africa are more important than less well areas such as the UK countryside.

What right do we have to build on our countryside yet tell the people of Africa they cannot develop their land.

As an individual we have little influence.  Together we can make a difference as Yuval Noah Harari, the author of Sapiens emphasizes by joining an organization.

So become an environmentalist by protecting our countryside.

Join CPRE (Campaign for the protection of Rural England)

Then and only then we can look at the wider issues