The  photograph shows me with the book I have written  title "My Friend Ruby".  It is about my dog  Ruby and how she changed my life.  With me in the photograph is Pearl who is Ruby's great grand daughter. 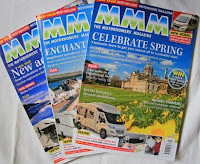 This is not the only writing I have done recently. I have just completed a series of monthly articles published in MMM (Motorhome Monthly Magazine) called "Wonderful Walks which ran during 2016. These articles gave detailed instructions of 2 walks starting right from the campsite. Writing to the strict specifications of the magazine was difficult but extremely rewarding.

From the outset before I even did my research there was a list of criteria.


2015 was spent going to the campsites and researching the information for the articles. Several of the sites I already knew and had an idea of the walks. Some were entirely new to me. I had many adventures and sometimes I had to go back to the campsite to adjust the information. I really enjoyed going to the different campsites and doing the walks.

Collating everything to send to the editor was far more complicated and time consuming than I had imagined. The first article took ages and several attempts before it was accepted. After a couple of months I had a template and found it easier and quicker to prepare everything.

I would like to do more of this.
Posted by Anna Chelmicka at 14:52